The Direct Drive Hand (DDHand) project is exploring an alternative design philosophy for grippers. The conventional approach is to prioritize clamping force, leading to high gear ratios, slow motion, and poor transmission of force/motion signals. Instead, the DDHand prioritizes transparency: we view the gripper as a signal transmission channel, and seek high-bandwidth, highfidelity transmission of force and motion signals in both directions. The resulting design has no gears and no springs, occupying a new quadrant in the servo gripper design space.

The advantages of the DDHand are demonstrated with the “smack and snatch” behavior. The manipulator is uncertain of the object pose and the table height. The arm accelerates the hand towards the object; fingers detect contact with the table then slide along the surface to locate the object; the arm simultaneously decelerates; the fingers grab the object while the arm accelerates upwards. The grasping maneuver is completed within one second, starting and ending at rest.

Moreover, If a robot gripper has to interact with an fragile or unstably balanced object like an empty bottle there is a danger that the object will be broken or toppled. T

his is because there is no way to manage the impulse imparted by the high reflected inertia of the motor rotors through the gearbox. Even if a spring is used, it is generally preferred to use a spring with higher stiffness to preserve the quality of position controller and apply high grasping forces. In contrast, the low reflected inertia of the DDHand mitigates this impulse mechanically. Figure on the right shows frames from such a contact with a book standing on its edge. When the robot approaches the book with a stiff position controller, unsurprisingly, the book topples. However, if the robot turns off the motors (zero commanded stiffness) the fingers can comply to the book maintaining its vertical state. The transparency also allows for variable impedance control. Varying the PD gains allows us to control the stiffness and damping of the fingers. 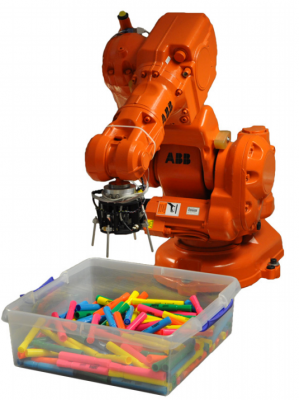 While complex hands seem to offer generality, simple hands are often more practical. This raises the question: how do generality and simplicity trade off in the design of robot hands? We explore the tension between simplicity in hand design and generality in hand function. It raises arguments both for and against simple hands, it considers several familiar examples, and it proposes an approach for autonomous manipulation using a general-purpose but simple hand. We explore the approach in several different contexts, including grasping, regrasping, recognition and localization.